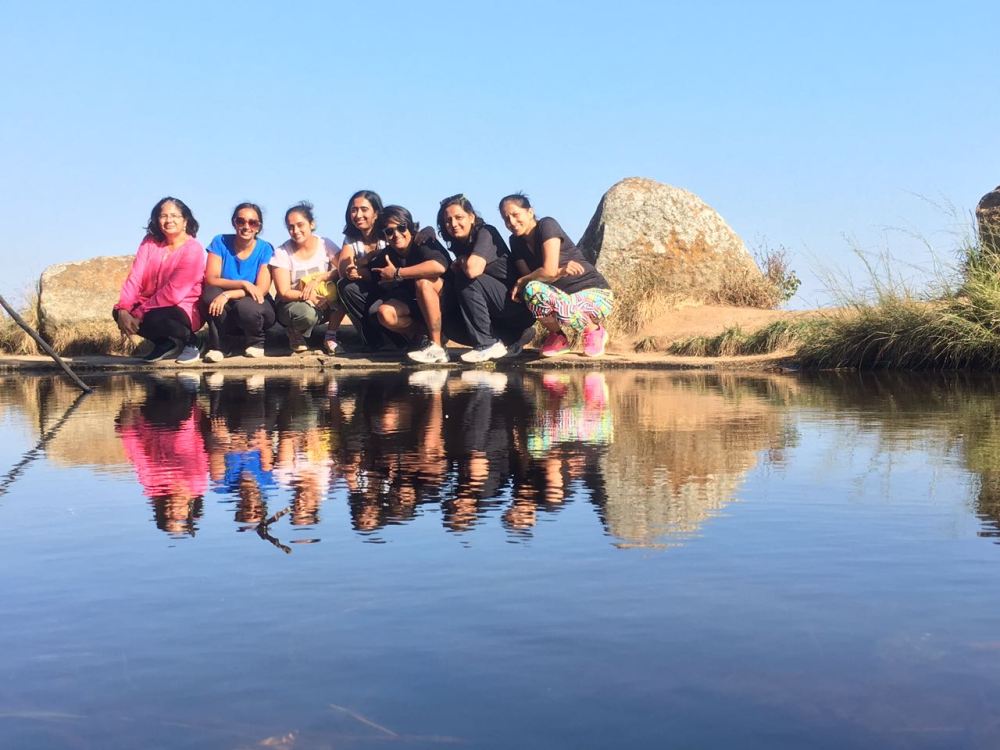 This time, I did not need much coaxing and getting up at 4.00 a.m. did not seem so bad. I made sure my bag was packed the previous night, have never been so organised, and alarm set. This trip was to Avalabetta. ‘Betta’ in kannada means ‘hill’ and I am assuming ‘avala ‘ means ‘her’ as there is a Lakshmi temple at the top. Avalabetta is in Chickballapur district. It is around 100 kms from Bengaluru. It was a nice smooth drive. It is always fun driving with friends chatting, some gossip and of course lots of laughs.

We reached around 6.00 a.m. and were famished. I had brought along some banana bread and we started eating it when a troop of monkeys decided to descend upon us. First rule when you see a monkey, do not be brave and hold on to your food. Couple of us had to sacrifice the banana bread and threw it to the monkeys. The monkeys also seemed to enjoy the banana bread as much as we did.

We started climbing with a friend who had been there before. She had told us it was 100 steps which was not bad at all. We reached the top, when we were informed that we had to go down a rocky, bouldery area. It was steep and looked very dangerous. A few decided to brave it and go down. Three of us were not as courageous as the rest and decided to stay up. We spent our time enjoying the view and watching people posing for pictures. It is quite amusing to watch people pose, like they were going to be on the cover of Vogue. When we got bored watching people, we found an easier way to go down. We went down and met our friends there. What a view! There was a ledge 5-6 metres in length tapering off. The ledge looked like it was a few inches in thickness and was precariously placed. It looked like it could not hold the weight of a person.

We then noticed the long line, people waiting to take pictures on the ledge. Our friends had already taken their picture, so we requested the people in line  to let us get our picture taken.

It was intimidating to go on the ledge but like everyone else in that line, I wanted a photo taken too; for my profile picture and what lengths we go for that picture!!!