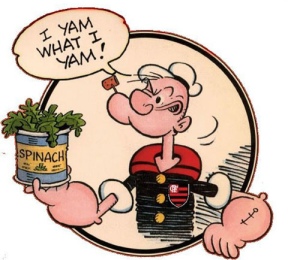 We all grew up learning about Popeye the Sailor Man and how eating spinach gave him muscles and that it is high in iron. Interestingly it does not have as much iron as was thought. It is a case of a misplaced decimal point. A German chemist in 1870 accidentally recorded that spinach has 35 mg of iron per 100g instead of 3.5 mg. Spinach’s nutritional value became well known. The error was corrected in 1937 but even though the British Medical Council tried to debunk the myth, people still think of spinach and Popeye and iron. Spinach and other greens like amaranth are nutritious and rich in vitamins and minerals.

In India, we get an abundant variety of greens. I prefer amaranth to spinach as it has more flavor compared to spinach. Recently I had posted a recipe called keerai molagootal, here is another simple recipe.

a pinch of asafoetida powder

Heat oil in a saute pan. Add ingredients for tempering. When the mustard splutters, add the greens and stir-fry. Add salt. The greens wilt so be careful about the amount of salt you add. Once the greens are cooked, add the coconut and mix.

Serve with rice or roti. 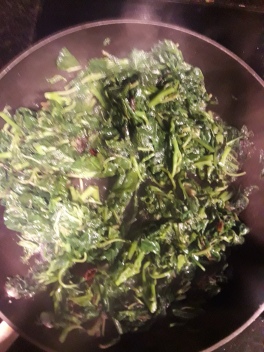 Follow T and Conversations! Chai with preethi! on WordPress.com